What are classrooms good for? 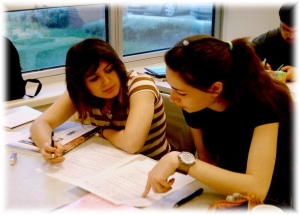 My recent experience as a student on a short intensive Spanish course has given me pause for thought. While I can’t claim that the experience was representative of all classroom language learning experiences, there were nevertheless a number of features of it that I think are fairly typical, such as the way that the coursebook determined the lesson sequence, the alternation between teacher-fronted and more learner-centred activities, a focus on form as well as on meaning, and, notionally at least, an overall allegiance to the practices (if not the principles) of communicative language teaching. (The centre’s publicity material claims that they use un método comunicativo).

So, what follows is not so much a critique of the classes themselves, nor of the teachers, nor of the materials that we used, but more a critique of the current orthodoxy, in the sense that I have described it above. I should also stress that, since the classes were experienced as if refracted through the lens of my own specific needs and dispositions (some would say obsessions), these comments should be interpreted solely in that light: the other students may have had a very different experience (and this diversity of perceptions is itself a typical feature of most classrooms, I would think).

So, what was the class good for?

The fact of the matter is that I didn’t ‘learn’ a great deal, if learning means ‘the acquisition of new information’, ‘the internalization of input’ etc. I did pick up a number of potentially useful formulaic expressions (of which I’ll be writing more about later) and had some fossilized errors brought to my attention (as mentioned in my last post), but if this was learning, it tended to be sporadic, incidental, and, in fact, largely accidental – a by-product of tasks that had an altogether different purpose.  This mismatch between what I was taught and what I learned may owe to the fact that I had been placed in a level slightly lower than my supposed one; however, it seems to me that the accidental nature of the learning is symptomatic of an approach to language teaching that presumes to know what learners need, rather than teaching them ‘at the point of need’, an approach, in other words, that imposes an agenda that is not the learner’s agenda.

For me, the real benefit of these classes was the chance to be communicative within the safe ‘climbing frame’ that the classroom dynamic offered. ‘Chance’ is the operative word here, since most of these opportunities to be communicative were fortuitous, a case of grabbing some pretext to talk and running with it, rather than the pretext being built into the overall design of the lessons. For example, in one lesson, a passing reference to dogs (in a grammar exercise) precipitated a discussion about the rights and wrongs of keeping big dogs in small apartments, about attitudes to dogs in the different countries represented, and about films about dogs, during which I was able to tell a story about a neighbour and her annoying dog, this whole (highly productive and interactive) digression taking up about 25 minutes of classroom time.

To their credit, the teachers not only allowed these opportunities to evolve (in most instances), but were maximally supportive in providing help (in the form of recasts, for example) or feedback (in the form of correction).  These teacher interventions seemed to represent real learning affordances, and served to distinguish what is called ‘instructional conversation’ from the kind of talk that occurs in ‘the real world’. The conversations we had were like dress rehearsals. They gave me the confidence to make the transition into the real world, where – for the first time – I deliberately sought out opportunities to initiate talk, and elaborate on the talk of others. I remember one day in the second week where I experienced a real ‘turning point’ moment, as I crossed the street to talk to an acquaintance at length, even breathlessly, about the classes I was taking. In the old days I would have crossed the street in the other direction – i.e. to avoid such an encounter.

But it has to be stressed that these emergent and scaffolded classroom conversations were seldom planned. They emerged. What was planned was a succession of coursebook-based exercises, where the primary focus was on grammar. And on a relatively narrow range of fairly low-frequency grammatical items, at that. Or it was on vocabulary, but, again, often vocabulary that not only took the form of isolated words (as opposed to words in their typical phraseological environments) but were words of relatively low frequency and utility.

The problem is (you guessed it) the coursebook. Not this particular coursebook (which was as good in its way as any comparable EFL coursebook) but the culture of the coursebook in general. Once you pin your curriculum to the mast of a coursebook, you effectively circumscribe the learners’ ownership of the process, undermining the very sense of agency that might have impelled them to the classroom in the first place.  (It was perhaps ironic that the coursebooks were on loan: we didn’t own them).

Over the two weeks of the course there was a constant tension between the coursebook agenda and the agenda that we, the students, managed to fabricate from random affordances. The salient learning moments tended to occur when we moved away from the book, not when we were immersed in it. (This is not to say that the book’s themes, texts and tasks didn’t sometimes stimulate a conversational detour, but these detours were unintentional, and might just as easily have been motivated by copies of the local free newspaper).

Defenders of the coursebook might say that these teachers did not know (or had not been trained) how to use the books in a discriminating, and productive way. There may be some truth in this, but it seems to me that the very presence of the coursebook imposes constraints that even the best teachers find difficult to circumvent.

First there is the grammar: one of the teachers herself admitted that the grammar problems that learners of our level typically face involve structures ‘lower down’ the grammatical hierarchy, such as past tenses, por and para, and so on. Certainly, the bulk of the correction we received when we were in ‘free talking’ mode had much more to do with ‘lower level’ (and more frequent) grammar items than anything to do with the immediate syllabus.

Then there were the texts, themselves chosen or written because they embed the ‘structure of the day’: rarely authentic, inevitably out-of-date and only accidentally relevant or of interest. Then there were the tasks: primarily form-focused, and narrowly focused, at that.  Rather than the coursebook expanding opportunities for learning, it seemed to shrink them.

I have to stress that none of these criticisms is directed at the teachers themselves, nor at the actual coursebook (whose writers I happen to know!) but more at the kind of education that prioritises imported content over the locally generated. Generating lesson content locally would, of course, make a different set of demands on teachers (but demands that these teachers could easily have risen to, and, in fact, often did). More importantly, it requires a different attitude, the kind of attitude shift that a ‘dialogic’ approach assumes. As Claire Kramsch (1993: 31) put it,

A dialogic pedagogy is unlike traditional pedagogy… It sets new goals for teachers – poetic, psychological, political goals that … do not constitute any easy-to-follow method. .. Such a  pedagogy should better be described, not as a blueprint for how to teach foreign languages, but as another way of being a language teacher.

So, what are classes good for? They are good places for incidental learning to occur, particularly of the kind that emerges naturally out of classroom tasks. They are even better places to rehearse, experiment, take risks – and get ‘at the point of need’ support. These opportunities, and this support, combined with the total immersion in the language that I experienced four hours a day, five days a week, hugely facilitated my transition from the learning context into the using content. For that I am very thankful.

Next week: What drives me?