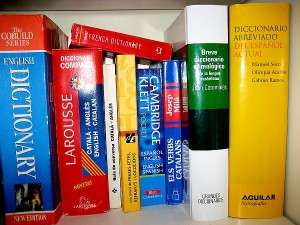 I’m about to embark on another long conference crawl, so I’ll be away from any direct contact with Spanish for two weeks. How can I maintain the momentum (that already seems to have been flagging since I took my intensive course at the end of the summer)?

One obvious answer might be to pop a novel or two into my carry-on luggage, and do some sustained reading. However, I have mixed feelings about the efficacy of the extensive reading that I have done to date. It doesn’t seem to have paid big dividends, given the time I’ve put into it.

I read El País, a Spanish national newspaper, daily. At a conservative estimate, I calculate (on the basis of 200 words per 15 column centimetres) that I read around 5000 words a day. Subtracting the days each year that I might not have access to El País (fewer now that it is online, of course), let’s say I read 5000 words 300 days a year. That makes my annual exposure to written Spanish in the region of 1.5m words of running text (ignoring whatever other reading I might also be doing). What gains might I expect to accrue, given this amount of input?

If students read approximately a million words of running text a year, and if they know 96-98 per cent of the words, they will be exposed to 20,000 to 40,000 new words… If students learn one word in ten through context, they will learn somewhere between 2,000 and 4,000 new words through extensive reading in a year.

It follows, therefore, that, in the 25 or more years that I have been reading El País daily, I should have increased my vocabulary by, minimally, 50,000 words. This would give me the (receptive) vocabulary of a fairly well educated native-speaker.

Is this in fact the case?

Estimating vocabulary size is not easy (see a discussion at my other blog here), and there seem to be no freely available online tests (that I can find) that will help me do this in Spanish. So, instead, I did a fairly quick-and-dirty test using a learners’ Spanish-English dictionary. This involved simply counting the number of known words on every tenth page of the 385-page Spanish section, and then multiplying the result by 10. By ‘known words’ I mean the words that I could reliably translate into English. This gave a sight vocabulary of roughly 10,000 words (although of those 10,000 many are proper nouns, like Chile or Rusia, while even more are cognates or compounds that I don’t recall having ever seen in a text but which are easily unpacked on the basis of their morphology, e.g. inmutable, autoadhesivo etc).

10,000 words is consistent with Nation and Gu’s (2007: 103) finding that, ‘in general learners need to know around 9000-10,000 words before most texts become easily accessible for unassisted reading’. But it is a long way from the 50,000 I ought to have accumulated, according to Grabe’s figures. This is not to say that I didn’t amass these 10,000 words through reading. Only that there seem to be diminishing returns.

Why?  Are the texts too difficult? That is to say, do I know too few of the words I have been reading, i.e. less than the critical mass of 96% that are necessary in order to guess the meaning of the words I don’t know?

To check the percentage of words I typically know when I’m reading El País, I made a mini-corpus of 5000 words from the online version of last Tuesday’s edition, selecting from the world news, national news, local news, opinion, education and culture sections – i.e. a fairly representative sample of what I would typically read. Of these 5000 word tokens only 35 were unfamiliar, giving me a text coverage score well over the 98% that Nation and Gu (2007) argue is the prerequisite for ‘adequate comprehension’.

So, it seems that I’m well within the optimal zone for vocabulary acquisition. So, why do I feel that I’m not acquiring any more new words?

One answer might be, not that the texts are too hard, but that they are too easy: I already have enough words to get by and therefore I don’t experience sufficient ‘incomprehensible input’ to trigger noticing.  Or it may be that my reading is too superficial: because I’m normally satisfied if I get the gist of what I’m reading, problematic words are easily overlooked and not given the attention they require in order to register in working memory. They simply fall below the radar: an indictment of skimming and scanning as reading tasks, incidentally. Fluency comes at the expense of continued learning.

In the end, extensive reading itself may not be enough. As Nation (2001: 155) admits, ‘Vocabulary learning from extensive reading is very fragile. If the small amount of learning of a word is not soon reinforced by another meeting, then the learning will be lost.’  But he adds (p. 238): ‘Learning rates can be increased considerably by some deliberate attention to vocabulary’. Such attention might include dictionary use, and it’s significant that I seldom if ever consult a dictionary when I’m reading the paper, often because I’m reading on the train or on the bicycle at the gym, and don’t have a dictionary to hand. Moreover, the constant interruption that dictionary use involves would seem to run counter to the principles of extensive reading, defined as ‘reading in quantity and in order to gain a general understanding of what is read’ (Richards and Schmidt 2002: 193).

And yet a dictionary might make all the difference. In a recent study, Ronald (2009: 94) found ‘substantial reliable evidence of the effect on a language learner’s vocabulary of monolingual dictionary use during reading’. Grabe and Stoller (1997: 119) make a similar point, based on Bill’s own experience of reading newspapers in Portuguese: ‘The use of a bilingual dictionary in a consistent and appropriate manner would appear to have a positive impact on vocabulary learning and reading development’.  Conversely, in a study by Horst, Cobb and Meara (1998) where readers were deprived of the opportunity to consult a dictionary, or even to linger on unfamiliar words, vocabulary gains were minimal.

So, I’m going to pack some Spanish novels into my carry-on. But I’m going to take a dictionary too. Fortunately, this needn’t add extra bulk. I’ve just uploaded a reputable Spanish-English dictionary on to my iPad. Let’s see if I use it!

Special thanks to Tom Cobb, Steve Neufeld, and James Thomas, for advice on data collection and analysis.