I was 36 when I arrived in Barcelona, a relatively late-starter in terms of second language learning, and with a poor track record to boot.  Moreover, I had an English-speaking partner, so (unlike the younger generation of expatriates I would be working with) there was to be no Spanish sweetheart to kick-start my language acquisition.  As a precaution, I had taken a few informal Spanish lessons prior to leaving London, and had bought a BBC course, whose listening texts were innovatively authentic but, for all intents and purposes, impenetrable. 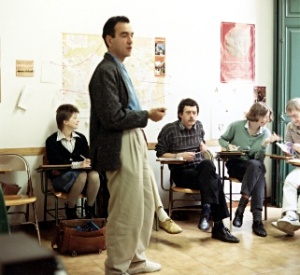 I was immediately plunged into a bruisingly busy timetable in a predominantly English-speaking institutional context. If Spanish was around, it existed at the periphery, like background noise: the language of shops, bars and restaurants – and hence primarily a weekend experience.

I signed up for Spanish classes in a private language school but the methodology was eccentric to say the least, and the content often irrelevant, being too firmly tied to the grammar structure of the day. Of one whole course all I remember is the sentence  El payaso hace reir a la gente (The clown makes people laugh), and the teacher’s constant use of the device Vamos a ver (Now, let’s see).

I then managed to get a place in one of the state-sponsored language schools (las Escuelas Oficiales). I was placed in a class way above my level. I hadn’t exactly cheated in the level test, but – being a language teacher and occasional test-designer myself – I was able to do the multiple choice grammar test simply by using common sense. Even when I was dropped down a level, I was still way outside my comfort zone. Again, the program was myopically grammar-focused (one whole semester dealt almost exclusively with the subjunctive), but at least the teachers had a good sense of how to set up pair and group work.

Nevertheless, frustrated by the lack of real practice, I started an intercambio (conversation exchange) with one of my students, an intense young poet with progressive tendencies. These weekly exchanges provided useful practice, although I think we were both frustrated by the way that the topics we wanted to talk about (films, literature, politics) tended to evaporate through want of the necessary linguistic means. He was also a much more disciplined student than me, and soon his level of English had far outstripped mine in Spanish.

I started another intercambio with a group of friends: the four of us met in a bar every Monday night and paired off.  V. (another chain-smoking intellectual) was uncompromisingly difficult, and impossible to understand. G. however, was the ideal partner: her English was more or less where my Spanish was. We seemed to be able to pitch the conversations at the optimal level of intelligibility, even if the content may have been relatively banal. When G. got an English-speaking boyfriend, the balance of the group shifted and my own role in scaffolding G.’s emergent English declined. Nevertheless, those well-oiled Monday night conversations probably did more for my Spanish than anything else to date.

I also tried to read in Spanish regularly: newspapers and novels, although often abandoned the latter as being too much like hard work. Watching TV and going to the movies played a minor role: my problems with decoding spoken language (more on that later) meant that my comprehension was largely pragmatic: i.e. pure guesswork (and frequently wrong). Had teletext subtitles been available, the combination of the aural and graphic signals might have made TV viewing more fruitful, but they weren’t. 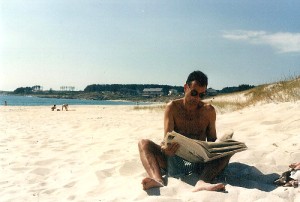 Unhappily perhaps, my views on language learning were at the time heavily influenced by the work of Stephen Krashen (it was the mid-80s after all), which meant that (a) I was very skeptical as to the value of instructed learning, and (b) I consequently placed a lot of faith in simply picking up Spanish through exposure. In those days, immersion ruled. I was to become one of its ideological fashion victims.

In Krashen’s defense, it has to be admitted that I was not exactly energetic in terms of seeking out optimal exposure opportunities, and even when I did get ‘input’, it was mostly uncomprehended. An article in the latest Modern Language Journal (Trentman 2013) makes the point that ‘much of the language contact research has revealed that contact with locals in the target language is often not as extensive as one might have expected from an immersion setting’ (p.459).

Thirty years on, and what’s new?  First of all, I tend to avoid mentioning the thirty years. The response is often outright incredulity: “But how come your Spanish is so bad?!”

Admittedly, people are normally more polite than that (although once a particularly tactless Californian woman, gesticulating like an exorcist, gasped: ‘Ugh. Bad Spanish!’).  So, in answer to the question ‘How long have you been here?’ I hedge, and let my addressee figure that I arrived when I had already reached the point in my life beyond which it’s impossible to learn anything new, let alone a second language.

Needless to say, this reaction – whether spoken or unspoken – is unsettling, to say the least.  And on at least two counts. For a start, it’s true: I simply ought to be able to speak better Spanish after thirty years, so there must be some flaw in my nature, such as laziness, or obstinacy, or just plain stupidity, that has prevented me from integrating linguistically into the host culture. Worse is the insinuation that failure to speak your host country’s language fluently is a moral failing, a discourtesy, an indecency, even: you’re not just a bad language learner, you’re a BAD language learner.  Failure to speak the language is tantamount to a failure to integrate, which in turn must be attributed to a lack of interest in, or respect for, the host culture – and all those who embody it. To the point that, through fear of offending, you become afraid to ever open your mouth. (Not opening your mouth is not conducive to the development of fluency, it goes without saying). 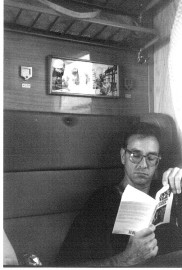 But more galling still is the knowledge that, since my professional life is devoted largely to helping other people become better teachers of a second language, my failure to master Spanish would seem to throw into doubt everything I stand for. It’s dispiriting, to say the least, to sense that, behind your back, you’re being labeled a charlatan, or an impostor.

Unsurprisingly, therefore, I’ve shown more than a passing interest in the literature on fossilization. While it’s debatable as to whether my Spanish is irremediable (and the point of this blog is to put that notion to the test), or indeed that any second language learning experience is necessarily imperfect, the idea that many, indeed, most learners reach a ‘ceiling’ or ‘plateau’, beyond which they cannot budge, is widespread in our profession. So, my ulterior motive is to put that notion to the test, too.

Before outlining the steps I plan to take to crank up my Spanish, I’ll be briefly reviewing some of the literature on fossilization, and then attempting to diagnose, from a linguistic perspective, the exact nature of my own ‘arrested development’. Then the fun will start!

I write books about ELT methodology and teach on the MA TESOL program at the New School in New York. I live in Barcelona. END_OF_DOCUMENT_TOKEN_TO_BE_REPLACED
This entry was posted on Sunday, August 25th, 2013 at 8:00 am and tagged with comprehensible input, fossilization, immersion, Krashen, language learning, second language acquisition, Spanish and posted in Uncategorized. You can follow any responses to this entry through the RSS 2.0 feed.
« The (de-) fossilization diaries
Fossilization: is it terminal, doctor? »

60 responses to “Some background”